New Delhi: Terming the 2002 Gujarat riots as “unfortunate”, BJP President Rajnath Singh today said it was unfair to blame state Chief Minister Narendra Modi for the incident, and accused Congress and some other parties of dividing the country on religious lines.

“One of our states is Gujarat. I agree an unfortunate incident took place. Who does not agree that it was unfortunate? Attempts were made to blame Gujarat Chief Minister Narendra Modi as if the riots were planned by the Chief Minister,” he said in New Delhi.

He was addressing the inaugural session of BJP’s Minority Morcha’s National Executive meeting.

“He (Modi) looks so sad…what is wrong with the people. Is it politics?,” the BJP President asked referring to charges that Mr Modi was behind the riots.

He said people should ask the Muslims of the states whether they feel any discrimination under BJP’s rule.

Mr Singh also used the occasion to lash out at Congress for adopting the ‘divide and rule’ policy.

“Whether Congress adopted any other policy of the British or not, they at least adopted their divide and rule policy…Congress and some other political parties have tried to sow the seeds of division in the country,” he said.

He admitted that members of the minority community working for BJP find it difficult to propagate the party’s policies among people due to the perception created that the party was against taking minorities along.

“The perception is away from the reality. We do not indulge in such politics,” he maintained.(NDTV) 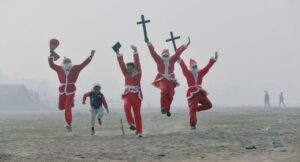